I’ve been using these sorts of problems in my classroom intermittently for many years.  My first exposure was at an NCTM conference in Baltimore in 2004.  This type of problem was titled “Puttering with Patterns”  similar to this one here: 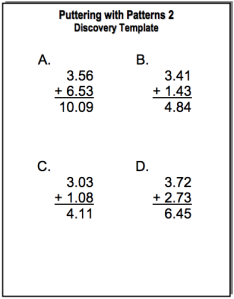 I worked as the math teacher in a k-21 special education facility at the time and immediately understood the benefit of posing problems like this to students with special needs…EVERYONE can notice something meaningful to contribute.

Here are several reasons why each one is different:

I was reminded of this type of problem by Christopher Danielson when he released “Which one doesn’t belong?  A shapes book.”

I’ve been out of the classroom for many years, but this year have returned to lesson plan for an 8th grade classroom that is being taught by a long term sub (the teacher moved out of state in October).  I’ve been in this classroom more often than not–co-teaching with the sub.  This has been my opportunity to really try out many of the activities that I have come across on Twitter–YAY!!!

When @MaryBourassa created the new site “Which One Doesn’t Belong?”, I was excited that she brought this type of problem to the forefront AND gave it a more secondary sort of spin.

A good portion of the students in these 8th grade classes that I am working with are reluctant learners.  But, #WODB pulled them all in.

We’ve been working on linear equations, including graphing lines using slope and y-intercept.  So for the last day before spring break I decided to use this:

as a lead in for this:

The sequence of instruction worked perfectly for these 8th graders…because, really, Polygraph is just a giant “Which One Doesn’t Belong?”

Fo the #WODB task, my students noticed that the 2nd graph was proportional, that the 3rd graph had a negative y-intercept, and that the 4th graph had a negative slope.  We needed to have a classroom discussion to determine an attribute for the first graph that didn’t fit in with the rest.  We ended up talking about x-intercept for that one (a term that they didn’t have yet).

All of these observations became questions they asked when playing Polygraphs.

I’m looking forward to making the #WODB problems a larger part of our typical daily routine.